Kyle Mastalinski (MArch/MUP '12), left, and Scott Selin (MArch '12), install Elevator B in Buffalo's Silo City. They were part of a group of five architecture and planning students that won a design competition for a new home for a massive colony of bees.

Our students and recent graduates continue to receive international recognition for their design of “Elevator B." The installation has become a landmark in Buffalo’s industrial corridor as visitors come to view the steel tower and the hive growing inside it.

Read more about the project's selection for the 2012 Pro Bono Publico Award in Design Excellence. 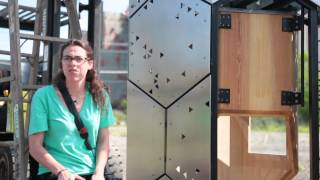 Watch students at work on the project

A massive and thriving colony of bees living in an abandoned industrial site in Buffalo has been moved into a brand new home, designed for them by architecture graduate students in the School of Architecture and Planning.

"Elevator B," as it is called, is a 22 -foot-tall, free-standing steel, glass and cypress tower that was raised last week in "Silo City," an area along the Buffalo River where several massive abandoned grain elevators are located.

The bee colony was living in the walls of a long unused outbuilding destined for rehabilitation. The bees were moved into Elevator B on June 10 and the honey from the existing hive was pressed and distributed among the designers and builders.

The new habitat's exterior hexagonal shapes are inspired by natural honeycomb, and its tubular design echoes the shape of the grain elevator silos that surround it. Elevator B is sited in a field adjacent to the historic "Marine A" grain elevator, built in 1925, which rises 196 feet from the shore of the Buffalo River.

Inside the tower is an innovative "bee cab" or bee elevator constructed of cypress and glass, which will actually house the colony and provide it with protection and warmth.

The bee cab typically will be in a raised position to allow visitors to step into the tower, look up and watch the colony through a glass window. The bees will enter the cab through holes near its top, about 10 feet above the ground in its raised position. The cab can be lowered to the ground to permit the beekeeper to attend to the health and safety of the bees.

Elevator B is a winning design in a student competition organized by the UB School's Ecological Practices Research Group. It involved four teams of young architects.

The competition, organized by the Ecological Practices Graduate Research Group and sponsored by Rigidized Metals Corporation of Buffalo, which owns the Silo City site, required teams of graduate and undergraduate architecture students to design habitats in which the entire "living body" of the colony -- thousands of bees and a huge honeycomb -- could live long and prosper.

The winning team is made up of five graduate students in the school's MArch and MUP programs who say their intention was not only to design a structure to house the bees, but to offer a way to educate the public about bee work and its contribution to our ecological system.

Bees, of course, are under enormous environmental and physical stress, and are perhaps less well understood than they should be, although in his day, St. John Chrysostom wrote that the bee "is more honored than other animals, not because she labors, but because she labors for others."

The members of the winning team are Courtney Creenan, who graduated in May 2012 with master's degrees in architecture (MArch) and urban planning (MUP); Scott Selin and Lisa Stern, each of whom graduated with an MArch in May, and Kyle Mastalinski and Daniel Nead, who will receive combined MArch and MUP degrees in 2013.

The participating teams were directed by Christopher Romano, research professor of architecture, and Martha Bohm and Joyce Hwang, both assistant professors of architecture. In 2010, Hwang famously designed and built an innovative structure to house bats and raise awareness of their enormous value to the ecosystem and of a fungal disease, white-nose syndrome, which so far has killed nationwide more than 1 million bats.

The contest was sponsored by Rigidized Metals Corporation, a Buffalo metal fabrication company, its CEO Rick Smith and his colleague, Jeff Ede. The company has assisted the School of Architecture and Planning on a number of design projects and has made the buildings and grounds of Silo City available to the school for several design experiments, student studio presentations, project construction and special events.