2018 Commencement marks historical moment for School of Architecture and Planning

“You have, by this point, put your career on a vector,” Daniel B. Hess, professor and chair of urban planning, told members of the School of Architecture and Planning's Class of 2018. “However that vector may change… resilience and flexibility in your professional life are important. Do not limit yourself to a normal or expected routine. Become the main character in your own story."

Hess's sentiments were echoed by several members of School of Architecture and Planning and UB leadership as they spotlighted the resourceful, adaptive nature of graduates at this year's commencement cermony, held May 18, 2018, at UB's Center for the Arts. From designing affordable housing plans to participating in the 2018 Time Space Existence exhibit in Venice, the students were recognized for their academic and civic achievements.

A group of students talk among themselves at the ceremonies. Photo: Dylan Buyskes, Onion Studio, Inc. 2018

A group of students talk among themselves at the ceremonies. Photo: Dylan Buyskes, Onion Studio, Inc. 2018

In addition to the conferral of degrees to 224 graduating students, seven awards were given to students, faculty, and community members in recognition of their academic and civic achievements:

-Blake Kane received the AIA Henry Adams Gold Medal, which is awarded to the highest-ranking graduating Master of Architecture student in recognition of excellence in architecture, leadership and high professional standards.

-Rachel Mordaunt received the ARCC/King Student Medal for Excellence in Architectural + Enviorment Research. This award is given to one graduate student for an outstanding Master of Architecture thesis and acknowledges innovation, integrity, and scholarship in architecture and/or environmental design research.

-Brendan Seney received the Best Professional Project Award in Urban Planning in recognition of the highest-quality final project in the Master of Uban Planning program.

-Both Randy Fernando and Michael Paraszczak received the SUNY Chancellor’s Award for Student Excellence, which honors State University of New York students who have best demonstrated and been recognized for their integration of academic excellence with other aspects of their lives, which may include leadership, campus involvement, athletics, career achievement, community service, or creative and performing arts.

-Kelsey Habla received the 2018 University at Buffalo Excellence in Teaching Award for Graduate Teaching Assistants, recognized for her superb and creative performance as a teaching assistant in architecture.

Additionally, two faculty members were recently recognized for their leadership and engagement in the UB community:

-Stephanie Cramer, adjunct professor of architecture, was given the Gary Day Award—which is presented annually by students to an outstanding Graduate Professor within the department—by the Architectural Graduate Students Association. Cramer was thanked for the determination and energy she brings to her classroom, fostering a fantastic learning environment.

The Dean’s Medal, in recognition of outstanding contributions to the professions of architecture and planning and to the betterment of our world, was awarded to a building for the first time in UB School of Architecture and Planning’s history. The medal was awarded to H.H. Richardson’s magisterial Buffalo State Hospital. Giving the medal to a building and a landscape is a way of recognizing the 40-year collective effort that was required to restore this treasure.

Stanley Lipsey was posthumously also awarded a 2018 Dean's Medal for his committment to Buffalo and his impact on the restoration of the Richardson complex. The former publisher of The Buffalo News was remembered for his commitment to investigative reporting and for his love for the Buffalo community. As a, per Warren Buffett, “honest-to-god journalist” with a Pulitzer Prize, Lipsey and his wife, Judi Lipsey, led the charge on several Buffalo architectural projects. Lipsey served as board chair for the Richardson Center Corp. during the complex's historic restoration. The medal was received by his wife, Judi Lipsey.

The school also took a moment to remember William M.E. Clarkson, a dedicated friend of the School of Architecture and Planning who recently passed away. Will Clarkson was a businessman, a teacher and mentor, a community leader and a philanthropist. In 1991, Will and his wife, Nan, bestowed the gift that endowed the Clarkson Chair, one which will continue to enrich the life of our school for many years to come.

Among this year's 224 graduates, 115 received degrees in architecture, 32 from the Master of Urban Planning program, 37 from the BA in environmental design program, six from the MS in Real Estate Development program, and 2 from the PhD in urban and regional planning.

Offering parting words to graduates, Dean Robert G. Shibley said: “Take time to celebrate and I hope you can greet each day with gratitude for the gifts of life on this planet, grief for the violence which we do to such gifts, and an active, vital hope for the future."

Photos of the Day

Watch all three parts of commencement below 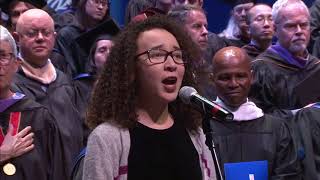 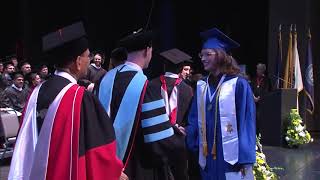