A group of senior architecture students present their domed assembly of paper tubing as part of a studio examining the architectural possibilities of paper waste by-products. Materials for the studio were donated by paper manufacturer Georgia-Pacific.

Students explored the structural composition and geometry of the dome through a model of plastic rods fastened with string. In the final work, the tubes are connected by bolts.

Students cut and folded sheets of packaging paper into whimsical canopies and a 100-foot paper dividing wall that can be folded into a stack no more than a few inches tall.

The packaging paper group designed a makeshift machine to automate the cutting and gluing steps in their fabrication process.

With high-grade cotton pulp donated by Georgia-Pacific's GP Cellulose division, this team of students created a moldable paste that was cast into a conical structure as rigid as fiber glass.

By assembling a series of pulp-based cones the students created a spatial dynamic with interesting an acoustical effect - underneath the canopy, sound is muted.

A group of architecture students have turned material convention on its head by transforming mounds of paper waste into rigid columns, canopies and enclosures.

Working with more than 1,000 pounds of waste by-products donated by the national pulp and paper company Georgia-Pacific, the spring 2016 senior studio, directed by architecture faculty member Stephanie Davidson, explored new applications for a material not usually considered for architecture and construction.

The studio involved an intensive and almost scientific exploration of the fibrous material, including microscopic examination of paper samples, physical manipulation of the sheets, tubes and lints to create new configurations and compositions, and, finally, the making of a 14-foot spatial enclosure.

"The idea was to use an exploratory, experimental, and process-driven design approach with materials that are not widely used in architecture, and not perceived as particularly valuable,” says Davidson. “With no strong architectural precedents, we were free to invent and experiment."

Georgia-Pacific's packaging division in Batavia, N.Y., which had already been donating corrugated paper sheets to the school, offered more after learning about the studio from Davidson. The company’s GP Cellulose division in Memphis, Tenn, which engineers cotton linter pulp (CLP)  for a variety of applications, was also involved. In the end, Davidson and her students were the recipients of several 'butt rolls' of packaging paper, dozens of 6- to 8-foot-long paper tubes, and two 400-lb bales of off-grade CLP, typically used to make banknotes and art paper.

In May, for their final review of their undergraduate career, the students presented four gravity-defying proposals: a wispy assembly of unraveled paper tubes; an assortment of foldable canopies and walls composed of accordianed packaging paper; conical columns of hardened pulp; and a reciprocal dome of paper tubes that was so large it had to be set up on the lawn outside Parker Hall.

The studio is linked to Davidson's research into the use of waste fibers in the casting of thin-shell ‘monocoques,’ or structural systems supported by only their external skin, similar to an egg shell. The use of biodegradable waste fibers like paper also raises new possibilities in sustainable material life cycles. 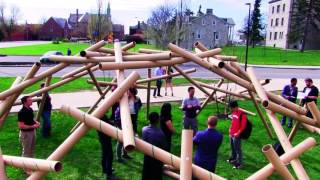 See what happened when a senior-level studio had the opportunity to build full-scale enclosures with materials donated by Georgia-Pacific.

The students started the semester with only a notion of their final assembly, letting their matieral and its properties provide direction - and adjusting process and technique along the way.

Says Davidson: "I encouraged the students to work with the materials as collaborators, to examine their material behaviors and extract their potentials, and evolve an architectural proposal step-by-step, rather than draw something in the abstract, and then try to make the materials "do" or "be" the thing that is drawn."

Students were divided into four groups based on their material of choice – two groups studied the paper tubing, another focused on packaging paper, and the fourth the banknote linters. Their first step was to slide tiny pieces of the material under a Scanning Electron Microscope to empirically examine its properties - for instance, the length and density of the paper’s fiber lints, or bundles, which factor greatly in the rigidity of the paper at larger scales.

Next, the students began to manipulate the material – one group delaminated and unpeeled the paper tubes to create connection points, another blended pulp with glue and water to create moldable paste. Students working with the packaging paper cut and folded their material to create expandable, space-making architectural elements. Test swatches and scaled models allowed the students to explore assembly methods and determine structural limitations before developing their full-scale installation.

"I encouraged the students to work with the materials as collaborators, to examine their material behaviors and extract their potentials, and evolve an architectural proposal step-by-step."

Along the way, the students invented entirely new fabrication and assembly methods. For instance, one of the paper tubing groups built a steam box to soften and unravel the cardboard before it was relaminated with glue and fastened to other tubes to create structural panels. After spending five hours cutting, folding and gluing sheets of packaging paper, students developed a makeship machine to automate the unrolling and gluing steps. Students working with the cotton pulp first cast their paste on balloons, but ended up spreading the paste over fabric due to its reusability in an industrial production setting.

As the paper-making students prepared for the final studio review of their undergraduate academic career, they noted the value of the scale and intensity of the experience.

"The fact that we had to take on this problem of making it full-scale – something we could dwell in, something we could walk through, is what attracted me to this material to begin with," said Justina Dziama, who assembled the walls of pulp. "I love working with that kind of challenge."

With his packaging paper structures in the background, Chris Gomez noted it was his first experience working full-scale. "Learning how these materials react at this large of a scale is something I am going to be using for the rest of my career."

The students presented their work to a room of critics that included representatives from Georgia-Pacific, as well as faculty in disciplines as diverse as sculpture, architecture and engineering.

Georg Rafailidis, UB assistant professor of architecture, reacted to the 100-foot paper wall that could be folded into a panel only a few inches thick. "I can't really imagine any other material that can change volume in this way, and with this kind of scalability. It has the logic of a book."

Another critic, Chris Siano, a UB architecture graduate and instructor of sculpture in UB's Department of Art, reacted to the pulp-based structures, which sat on a studio floor covered with remnants of the students' earlier prototypes. "It is clear that you immersed yourself in the material. You've reached a level of mastery on a material level."

James Emerson, Georgia-Pacific director of currugated operations at the Batavia facility, who was also a member of the final review panel, said the collaboration with UB was a perfect fit for the company, which places a strong emphasis on education, innovation and 'growing smarter.'

"The results of the [studio] support our view of education as the key that helps to unlock a student’s potential," he said. "The up-close look at the student’s work was inspiring and provided a greater understanding of University of Buffalo’s School of Architecture and Planning."

Davidson continues to bring into her teachign and practice the use of waste and resourceful approaches to experimenting and innovating with simple materials. Her fall 2016 Material Culture Technical Methods seminar, “Elemental Materials,” has students working with basic, naturally-occurring materials with the same ethos as the paper and fiber studio. Ultimately, it is Davidson’s hope that students see and experience first-hand, through getting to intimately understand materials, that buildings – like earth, leaves, cotton and paper – are an integrated part of our environment.

Samples of the paper products are prepared for viewing under a scanning electron microscope. The empirical research, conducted early in the semester, revealed physical properties, such as fiber length and density, that affect the material's structural potential.

Students employ Scanning Electron Microscopy to study the material behaviors of paper fibers and their potential at an architectural scale. Photo courtesy of Stephanie Davidson

A microscopic view of paper fibers.

Stacks of packaging paper, before their transformation into structural objects.

To explore the geometry and fastening options for their domed assembly of paper tubes, one group of students built a scaled model of plastic rods held together with string.

One group of students delaminated paper tubing and then relaminated the strands to create connection points for a series of structural panels. Photo courtesy of Stephanie Davidson