Share This Print
“That’s part of the DNA of our school. We happen to believe that students learn best when they take what they learn in the classroom and apply it in a real-world context. ”
Mark Foerster, senior fellow of real estate development
School of Architecture and Planning 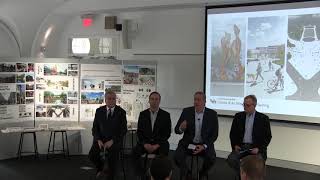 For students in a real estate development graduate studio in the School of Architecture and Planning, the opportunity couldn’t have been timelier, or more exciting.

While they were researching and dreaming up ideas for redeveloping the Eastern Hills Mall in Clarence, a local development team also was beginning its initial examination of the site, which would be given a very new, and different, life.

“The timing on this was so fortuitous for us,” said Mark Foerster, senior fellow of real estate development, who led the studio with Hiro Hata, associate professor of architecture and urban design.

The fact that the development teams were in the early stages of the project, with no formalized plans, created an opportunity for the students to shoot for the moon. “Hiro and I asked our students to be aspirational, to think big, to create some bold visions as well as be practical,” Foerster said during a news conference in Hayes Hall on Wednesday to highlight the project and the students’ contributions toward it.

The students’ work was impressive, according to the development leaders working on the project.

The mall, which opened in 1972, thrived for decades. But, as has been the case across the U.S., the growth in online shopping has led many mall anchor stores — and the shopping centers themselves — to close. As a result, Eastern Hills Mall owners Mountain Development Corp. and Uniland Development Company decided to transition the property from a shopping mall into Western New York’s first town center development.

Clarence officials had already paved the way for the project by rezoning the 106-acre parcel so that it wouldn’t end up as a car dealership or series of big-box stores. In contrast, a town center is a walkable and integrated open-air, multi-use development anchored by retail, dining and leisure uses, as well as multi-family residences.

Students in the studio, representing the school’s graduate programs in real estate development, architecture and urban planning, honed in on a smaller piece of the property and spent the fall 2018 semester thoroughly researching the site and its new potential. They worked in teams, with each exploring a different aspect of the redevelopment, such as encouraging green infrastructure, incorporating best practices in urban design into a suburban project, and creating attractive and effective pedestrian connections and public art.

“We are trying to create a catalyst site, a walkable and pedestrian friendly development with a mix of uses,” said Mustafa Ardalan, a Master of Urban Planning student in the studio.

“We wanted to respect the existing conditions of the residential neighborhoods to the east, but also set a precedent for more connected, responsible, approachable development along that corridor,” added Jeff Rehler, also from the MUP program.

Gensler has begun a market analysis, which will lead into a feasibility study. Later this year, Gensler will present a conceptual master plan that will serve as “a visual representation of what the sort of community at Eastern Hills Mall could become,” said Bruffett. In addition, Gensler will create a brand that speaks to the development’s potential.

Officials from Mountain, Uniland and Gensler said they welcomed the opportunity to work with UB students. Representatives from Uniland and Gensler actually served as the unofficial clients and evaluated the students’ work at the end of the capstone project.

“And their work was inspiring,” Bruffett said. “It sort of came full circle to me to see these student practitioners, if you will, tackling the same problems that we’re now tackling as professionals. And we thank them for their inspiration. It was great work.”

The studio followed the school’s mantra of learning by doing, Foerster said. “That’s part of the DNA of our school. We happen to believe that students learn best when they take what they learn in the classroom and apply it in a real-world context,” he said.

Sylvester Mallardi, a student in the Master of Architecture program, appreciated that part of the studio, along with its interdisciplinary nature by involving students from architecture, planning and real estate development.

“That’s where this studio really is strong in conveying that real-world feel. I think that’s something on a personal level and a professional level — it’s a great experience for us to get to work with professionals that are doing it,” Mallardi said.